I’m not going to pretend like I’m some sort of expert. But I make it a point of understanding cities when I visit (part of the reason I love to travel), and learning how to use the transportation efficiently is part of the deal.

My favorite transportation system in the entire world is London’s system. It’s extensive, has so many points where lines cross (lots of transfers!) user friendly, and has lots of information posted everywhere! I think as long as you know the stop you’re currently at (signs everywhere) and the stop you need to get to, you can easily connect the dots and follow the colors. End of story.
New York’s subway system is not so straight forward in my opinion. While I’ve been to New York dozens of times at this point and ridden the subway tons, I still always feel the need to triple check where I’m going before I go underground. I’ve finally figured out a few things that make this system work, and give me peace of mind while using the MTA. 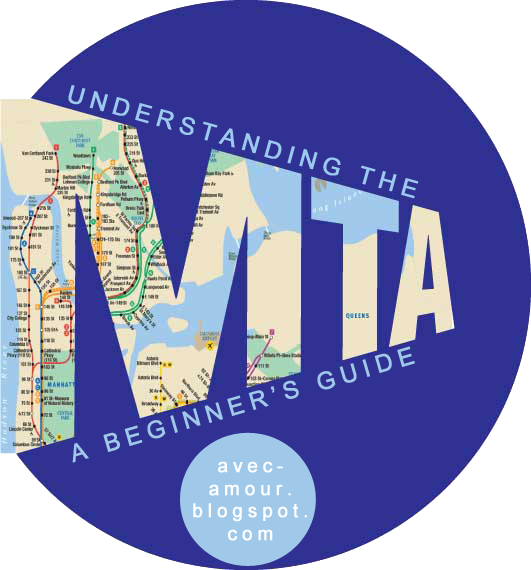 1. Before You Go Underground – Uptown or Downtown?
There are three types of subway entrances, even if it’s for the same exact line. No matter what, there will be a large black sign with the name of the station (i.e., 14th St – Union Square) and the trains it serves (L, N, Q, R, 4, 5, 6) — but there may be more information .
YOU CAN’T ALWAYS ACCESS UPTOWN AND DOWNTOWN FROM THE SAME ENTRANCE. So keep your eyes out for the following: 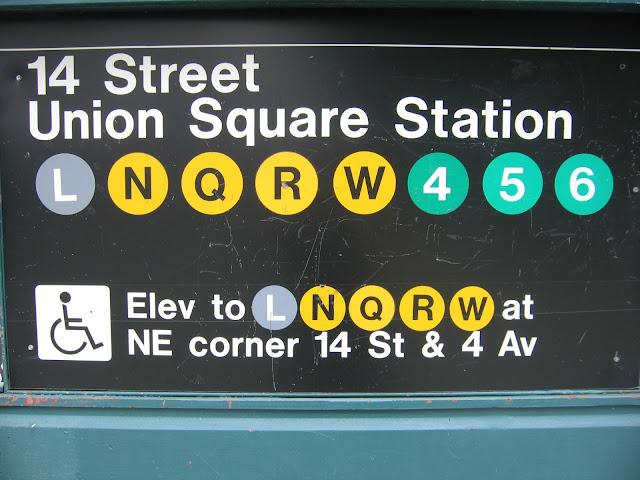 A – Uptown. The uptown train will usually say something like “Uptown and the Bronx” or “Uptown and Queens”. Sometimes it will say something confusing like “to Jamaica Ave” – if you don’t know if that’s uptown or downtown, make sure you ask someone before you swipe your card! 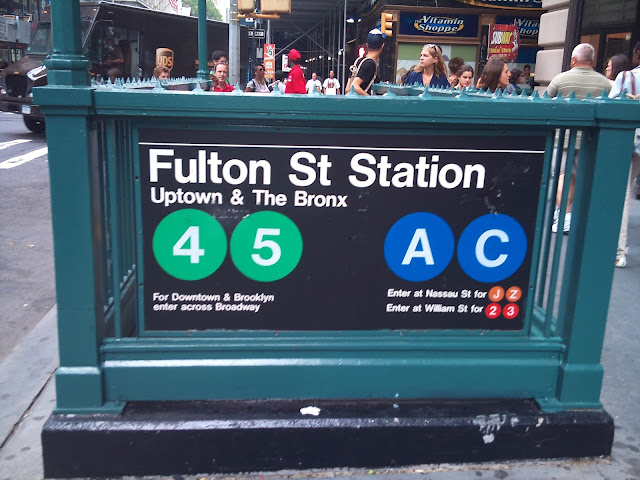 B – Downtown. The downtown train will usually say something like “Downtown and Brooklyn” – the A/C sometimes says “To Elucid Ave” which is in Brooklyn – but how would you know that? Once again, just check with someone.
C – Two for One. The all inclusive will just say “14th Street Station” and list all of the train lines you can access. If there’s no specific information, you’re safe to enter (usually 🙂
The reason this is important is if you go underground, swipe your card, and then realize you are on the Uptown platform trying to go downtown, you’ll have to leave, re-swipe (there’s usually a 20 min wait time if you’re unlimited or you’ll have to pay another fee if you just have money on the card) and then catch your train.
2. Colors/Numbers/Letters
NYC, unlike London or Chicago, has blocks of colored lines that are the same but also different.
We’ll use the A/C/E lines for example. They are all BLUE. They all are considered “8th Avenue trains” because they primarily run down 8th avenue in midtown Manhattan – but they start at different places and end at different places, and don’t all stop at the same places… even along the same line. For example, my subway stop includes the A & C but not the E, because the E doesn’t run to Brooklyn – it ends near the World Trade Center.
How can you be sure which stops use which trains?

There are tiny tiny letters beneath each stop on the maps inside each subway station and in most of the subway cars (underlined in LIME GREEN). These letters let you know that you can’t take the A train if you’d like to get off at 23rd St or 50th St.
3. Local vs. Express
If we are sticking to A/C/E, the A runs EXPRESS and the C/E both run LOCAL. Local means they stop at every stop from the beginning to the end of its line (in theory – still always best to check). The A skips stops, as seen above. The A will get you there faster — but only works in your favor if it goes to the stop you’re looking for.
What’s important to remember is SOMETIMES the A runs local – such as “late nights” (which is quite ambiguous in itself). And it’s also worth noting that many times, a Local & Express train might pick up on the same platform! Try to look for any small signage, and listen to any announcements…. even though most of the time you just hear “alsejf oiniubn fdvnwoef…. please stand clear of the doors”…. which is super helpful 😉

4. White Dot vs. Black Dot
A black dot means it’s a stop. A white dot means you can change trains. This means if you’re on the C/E, there might be a white dot meaning you can switch to the A. But it can also mean you’re switching to an entirely different line.

5. Follow Their Lead
If a bunch of people waiting at one track suddenly walk to another track, ask one of them why – sometimes there is an announcement “The A train is running on the Local track until 34th St/Penn Station, then will resume on the Express track”. Things are constantly changing and often make no sense.

Just Go With The Flow
The MTA is not a perfect system – when in doubt, just ask someone. Or two someones. Things change all the time, often don’t make sense, or just aren’t running the way they are supposed to be. Don’t sweat it. If you end up somewhere different, see it as an opportunity to explore New York 😉

How To Choose the BEST Souvenirs When Traveling