When we decided to go to New Zealand, we knew we’d need a mode of transportation. Unlike Europe, New Zealand is spread out and more recently developed. Trains and public transportation are almost non existent, especially between different regions. We knew renting a car (and driving on the other side of the road!) was in our future, and we needed to decide which was best – the all inclusive camper van, or the standard full sized car. 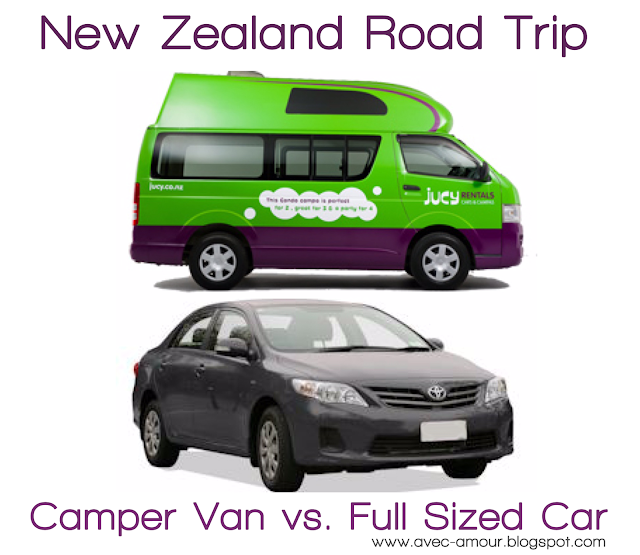 Which did we choose? The full sized car. Here are 5 reasons why.

1. The False Promise of Freedom
We were intrigued by the camper van, thinking we could plan our entire trip very loosely, just parking anywhere on the side of the road. This, however, turns out not to be true; most of the country requires you to reserve a spot at a camp site rather than just park. There are a few areas on the south island, but not enough to allow a free roaming trip.

2. Saving Money
We thought renting a camper van would be an all inclusive – a place to sleep and means of transportation, killing two birds with one stone. While it can be both, there are still additional costs associated. Because #1 is true, and you still have to reserve camp spots, we weren’t necessarily saving money on hotels. At an average of $40/night for camp spots (and nice hotels ranging from $80-$150/night), and the fact that camper vans cost more than twice as much than a car, the full sized won again.

3. Gas Money
Our little car got between 30-35 MPG, where the camper van would average 15MPG or LESS. Planning a 1400 mile road trip at half the gas price was instant savings.

4. Crazy Roads
While we didn’t factor this in ahead of time, I am SO thankful we had a car instead of a van. The roads in New Zealand are crazy! We drove over dozens and dozens of ONE LANE BRIDGES. I don’t mean one lane each direction, I mean one lane. With no stop light. Essentially “hope nobody is coming the other way” with a CAR.

Also, unless you’re in Auckland or Christchurch, you won’t be on major interstates – more like state roads. One lane each way, and many are winding, cliff side, and terrifying. I am SO thankful we didn’t have a top heavy camper van while we were driving on the side of a cliff with no guard rail.

OH, not to mention on the other side of the road.

5. Leaving Your House At Home
While I found New Zealand to be an extremely safe country, I couldn’t help but notice how many people were driving to every tourist attraction with a van full of their possessions. It was nice to have a place to do laundry, leave our valuables behind, and get out of the car for a while!

It’s definitely nice to have options! I think the camper van might work best for some, but wasn’t the right option for us. Perhaps consider it if you’re staying in a few places for a longer period of time, rather than several places for 1-2 nights. Hopefully if you’re doing some research, this helps you make a decision!

Have you ever rented a camper van?
xo

PS – We rented our car through Jucy Rentals and had a WONDERFUL experience!

How to Travel for FREE

How to Budget Travel Into Your Lifestyle: Part I

Why I Love Our US Bank Flex Perks Travel Rewards Credit Card (and so will you)!