Travel Necessities: What’s In My Carry On 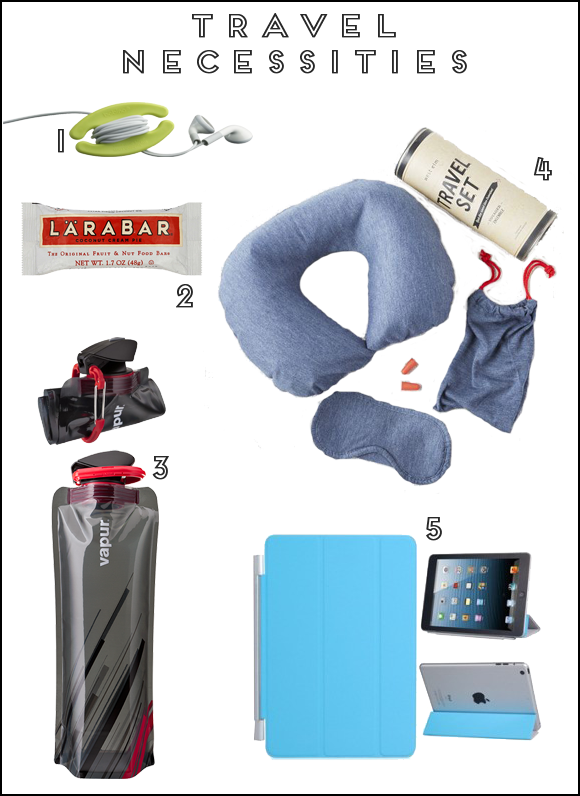 1: Bobino Cord Wrap // 2: Larabar // 3: Vapur Collapsable
Water Bottle // 4: West Elm Travel Set (sold out) // 5: iPad with Smart Cover
You literally won’t find me on a plane without these things.
After years of overpacking on the “what if’s” (read: scarves & shoes) and leaving out some essentials (like a snack), I think I’ve finally mastered it. But the great thing about every item up there is that
Bombino Cord Wrap
You can find similar alternatives to this little cord keeper, and any of them will do. But I will so that I love grabbing my headphones and not spending 15 minutes sorting out the tangles every time I want to use them.
Larabar
Once again, this is personal preference. But I find that short flights (like the one-hour-and-some-change Nashville to Chicago) is always the time I’m the most ravenous. Since gems like American Airlines don’t even serve a crummy little bag of peanuts or pretzels anymore, it’s wise to have something to much on! I find granola bars are a good choice because they can live in your purse for a quite a while and still be edible. Almonds are another go to. I personally prefer Larabars because they  contain very few ingredients, and all of which can be read without a translator & purchased easily at a grocery store (the coconut one has: dates, unsweetened coconut, almonds, cashews, and extra virgin coconut oil. THAT’S LITERALLY IT.)
Vapur
I’ll never forget the day I invented this. I was sick of buying bottles of water when I was out, but also sick of carrying around a HUGE reusable canteen or Nalgene just incase I was thirsty. I thought to myself, “What if there was a re-usable Capri Sun type bottle that I could fill up with water, and leave flat in my purse when I wasn’t using it?!” I swore I was going to be a millionaire…. until I googled it and found out it was already invented. Dang it. Well, if I’m not going to be rich, I’m just glad it’s already a thing, because I use it constantly. I got mine on Amazon (certain colors go on sale from time to time).
Travel Set
I’ve found that being short on airplanes comes at an advantage & a disadvantage. The advantage? Leg room is not an issue for me. However, my head is always being pushed forward/down by the headrest, because it’s where everyone else’s necks are. A neck pillow seemed like a nice option, but the inflatable ones were sticky plastic and the plush ones took up too much space… so I just skipped it. UNTIL I found this great set at West Elm! The jersey knit cover makes it soft, but the pillow itself is a blow up… best of both worlds! It’s awesome. The West Elm set is sold out, but here’s a similar one.
iPad Mini & Smart Case
I never thought I’d get an iPad, especially a mini one (I’m definitely one of those people who thought they were just oversized phones), but I’m so glad we have it. On trips where we’re only doing light work, we just use that instead of hauling a laptop. Plus, the iPad can have books, movies, magazines (all Condé Nast magazines include a free digital subscription!), and the battery lasts forever. We load it up with movie rentals from Amazon & use the Smart Case to prop it up. The Smart Case was a non negotiable to me when we decided on getting an iPad. But, we’re cheap, so we got one off eBay that came with a hard case for the back, too.
So there you have it! Those are my essentials. Do you use any of these when you travel? Think it’s over the top? What are your must-haves?
Share on
Previous Post Next Post 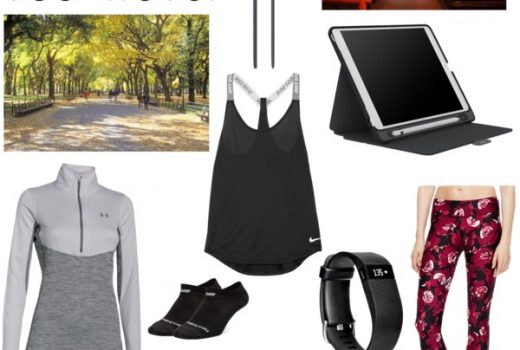 How to Workout While You’re Traveling