Hi guys. I wrote this post on Friday, before all of the horrible stuff happened in London over the weekend. It’s still one of my favorite places on the planet and I’ll never stop visiting it 🙂 More on that tomorrow! For now, enjoy the recap of visiting the Tower of London.
I don’t know how it’s possible, since I studied abroad, lived, and have visited London a million times in the last decade…. but I’d never been to the Tower of London until this March! Actually – I do know how. I was a student living off my credit card, or making £6.75/hr and paying £375 a month to live in a closet. 🙂 So if it wasn’t free, I probably wasn’t doing it. I don’t really have an excuse for the times I’ve visited since, except I never made time or budgeted for it. To be honest, I assumed it was pretty expensive. It wasn’t! If you book in advance, it’s only £24 (which is about $30 USD), which isn’t too bad. Especially for how amazing it was! For starters, the Tower is not actually a tower. It’s a castle and a fortress. There are like 3 or 4 walls built around the original building, even though only a few of them still stand. It’s like a little city in there! The oldest building is 939 years old…. which is INSANE. The Tower is such a treasure. There are so many historical stories we know and love that took place here! The best part of visiting was hearing these stories from the Beefeaters (yes, like the gin 😉 who live on the premises and are the keepers of the Tower. They give free tours every hour! There are so many cool stories here. You can see a few blackbirds on the green in the photo below. They are Ravens that they clip the wings (don’t worry, it doesn’t hurt them, the wings grow back! It’s like clipping your fingernails) so they stay at the Tower to protect it. There also used to be lions and all other types of wild animals at the Tower, until they were moved to the London Zoo a hundred or so years ago. Isn’t that crazy? This is the White Tower ^^ it was built in 1078! Below shows just one of the cannons. There were SO MANY on display. We seriously loved visiting the Tower of London. I personally love history (and historical fiction), so seeing the place that so many famous stories originated from (Henry the 8th, Anne Boleyn, The Princes in the Tower, many famous executions, etc) was super fun for me. If you’re a history person at all, I highly recommend a visit to the Tower! Make sure you have 3-4 hrs a least to explore, as the grounds are expansive and there’s almost 1,000 years to digest 😉

I hope you enjoy it as much as I did! Have you ever been to the Tower of London?
xo 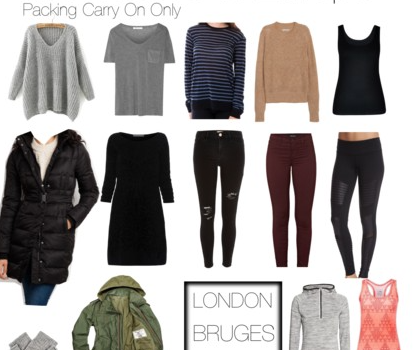 Packing for Two Weeks in Europe in a Carry On